Under the patronage of the Minister of Human Development and Labor in the State of Khartoum and Sudan Printing Press Company Ltd., honored by the 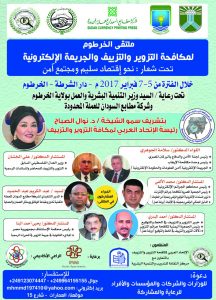 President of the Arab Federation for Combating Counterfeiting ,Sheikha Nawal Al-Sabah, held at the Police House in Khartoum during the period from 57/2/2017. Under the slogan

Towards a sound economy and Safe society

A number of experts and consultants from various Arab countries participated in the forum to share experiences in the light of cybercrime, which became transboundary and destructive to the national economy.

In the beginning of the meeting, the Director General of Sudan currency Printing Press , Salah Ahmed Ali, explained that the work in the company is an extension of a long experience in the secure printing since the fifties and that it is responsible for protecting all official documents of the state of economic and security nature, , In addition to printing paper currency. . He stressed the company’s keenness to develop its cadres through training courses inside and outside the Sudan to keep pace with the technological developments in the world. The company Committed to meet the need of the country of paper currency. It is now the third in the world to have modern technology and

safe devices to print the currency and all important documents, achieving the highest levels of insurance. Sudan is one of four countries in the Arab world and eight countries in Africa, which owns printing presses. The company is ready to cooperate with all sectors inside and outside Sudan.

The experts participating in the forum are:

Chairman of the Security and Defense Committee of the Egyptian Parliament and Head of the Anti-Terrorism Unit, Maj. Gen. Osama Al-Gohary, discusses electronic crime (information security and crime)

Advisor Dr. Ahmed Al-Badri – Expert of forgery and counterfeiting in line and 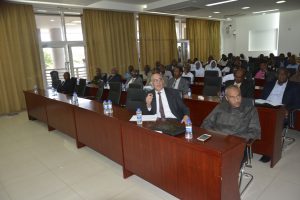 signature and the President of the Yemeni Association for the fight against fraud, dealing with the signs of fraud and counterfeiting in the line and signature

Mr. Ali Al-Khashan, the former Palestinian Minister of Justice, speaking about forgery and falsification of official records and documents

Director of the Executive Office and Public Relations Unit of Sudan Printing Press Mr. Abdul Karim Abdel Hamid Fadl Including securing and printing documents and means of guarantee and protection.